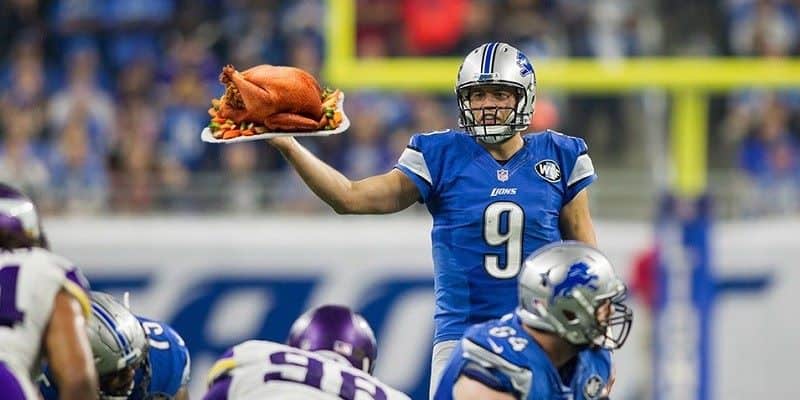 After preview upon preview, the highly anticipated Turkey Day NFL matchups are just around the corner. And though the games look marginally promising, they’re not necessarily what the NFL was hoping for when it first put this buffet on the menu.

Thankfully, all the top offshore sportsbooks now have odds posted for the three Thanksgiving football games on offer, with the Bears-Lions showdown being the most evenly matched per the betting public. Meanwhile, the Cowboys are getting some (undeserved) seasonal love against the Bills as the Saints look to avenge a surprising recent loss to the Falcons.

The Bears started off the season with deep playoff aspirations, but their season – like so many Thanksgiving leftovers – is basically wrapped up and on ice. At 5-6 and sitting at third in the NFC North behind a pair of 8-3 teams (Packers, Vikings), they’re already playing for next year. Nevertheless, they’re slight favorites in their Thursday afternoon matchup with Detroit.

Of course, the three-win Lions are even worse, sitting beneath the Bears at last place in the division. This contest, slated as the first game of the day, is absolutely the one to miss. And given its 12:30 pm start time (FOX), it’ll be the easiest one to miss, too. Your oven and stovetop, after all, are going to be far more interesting.

The Bills are 8-3, sporting one of the best records in the AFC and poised for a likely wild card berth in the 2019 NFL Playoffs. Further, they’re on a two-game winning streak, and they boast one of the best defenses in the game.

Yet somehow, inexplicably, they’re seven-point underdogs against the 6-5 Dallas Cowboys, who just got stuffed by the Patriots in a snow-covered defensive showdown in Foxborough. While the ‘Boys should still take the NFC East, the 5-6 Eagles are breathing down their necks. And remember, it’s division or bust for America’s Team, as they can’t credibly rely on an NFC wild card this year. And forget about a hot plate – Cowboys head honcho Jason Garrett is on the hottest seat in the NFL.

With both teams out to prove their potential playoff chops, this should be the best game of the day. And for football bettors – especially those assembling a big Thanksgiving parlay – the Bills’ payout is the best value going. If you’re hungry, take Buffalo on that delicious Thanksgiving spread. The game kicks off at 4:30 pm on CBS.

If you’re still awake after the first two tilts and a bellyful of tryptophan, the Saints-Falcons matchup (8:20 pm, NBC) could be interesting.

The Falcons, at 3-8, actually beat the Saints handily in Week 10, but the Saints are 9-2 and own first place in the NFC South. Further, they’re playing for a first-round bye, while the Falcons are playing for…some reason.

The Saints should cover easily, but Week 10 remains concerning for NFL betting enthusiasts. And that’s the only reason Nola isn’t a double-digit favorite going into Atlanta.