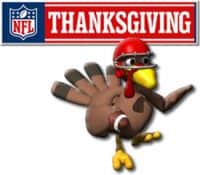 The point spread is the most popular type of bet placed on NFL games and is something we can all be thankful for.

Why is that? The point spread allows any NFL matchup, regardless of how good or bad a team is, to become “equal” and creates the best game-to-game value when betting on the NFL.

Whether you’re a beginner or an expert, we’ve got you covered when betting on this year’s Thanksgiving NFL matchups.

We’ve defined the point spread, given each team’s ATS record in 2018 and whether they won the previous matchup, posted the outcome of last year’s Turkey Day bets, and included the ATS records and trends from Thanksgiving dating back to 2006.

We hope this helps you beat the spread on Turkey Day, and all of us here at TFG hope you have a great Thanksgiving! (And remember to save room for dessert!)

How the NFL Point Spread Works

The favorite is given a set number of points by a sportsbook and represents the expected outcome against the underdog. When a matchup is predicted to be “even” by a sportsbook, a pick’em game takes the place of the spread.

Favorite (-) – To win a bet on the favorite, the team must win by more than the set number of points.

Underdog (+) – To win a bet on the underdog, the team must lose by less than the set number or win the game outright.

Pick (PK) – To win a bet on a pick, the team must win the game outright.

It’s important to know how well or how poorly teams have performed during the season before betting on any of the three Thanksgiving Day NFL games this year. Here are each team’s current overall record and record against the spread during the 2018 season.

All three NFL matchups on Thursday will feature division rivals who played earlier in the season. Here are the results from those prior games.

ATS Analysis: The Bears were the only favorite to cover the spread from the first matchup between each team this season while the Redskins won at home and the Saints beat the spread on the road. Keep in mind that all the road teams from earlier in the season will play at home on Thanksgiving Day.

Last season, the two favorites won their Thanksgiving matchup, and the Chargers won easily in their pick’em game against the Cowboys.

In 2006, the NFL decided to have three matchups played each Thanksgiving instead of the traditional two games. During that time, the favorites have dominated on Thanksgiving Day, winning 68% of the time. However, over the past five years, the margin has shrunk to 54% and just one game over .500.

Here is a complete year-by-year breakdown of how the NFL favorites have fared on Turkey Day since introducing a third game in primetime.