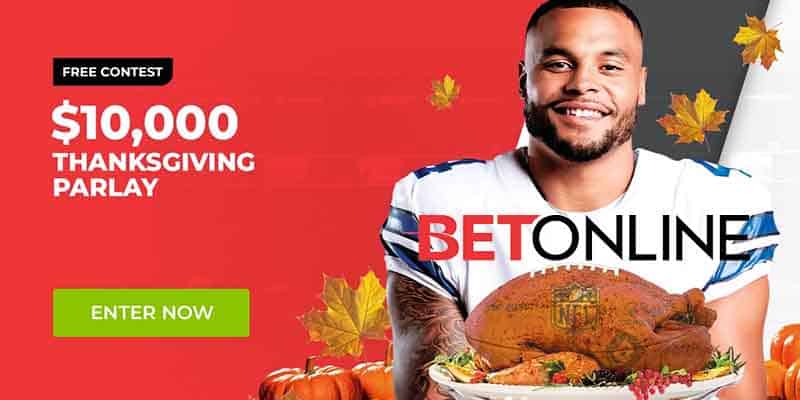 If you’re planning on betting on the NFL over Thanksgiving Thursday and you’d like to add $10,000 to your bankroll without risking anything, check out the following offer from top online sportsbook BetOnline.

The Thanksgiving Parlay offered up by BetOnline is free to enter for existing and new members and is currently accepting entries until tomorrow at 12:30 pm ET.

BetOnline customers need to select their NFL parlay picks against the spread or on the over/under on the three games featured on Thanksgiving Day. Football parlay selections can be altered up until tomorrow’s deadline of 12:30 pm.

Here are the six wagers that must be selected correctly for tomorrow’s Thanksgiving NFL games.

While there is no cost to take a crack at the $10,000 prize, members must wager at least $25 at BetOnline’s sportsbook on the Thanksgiving NFL games.

The $25 must be placed on straight bets and cannot be used on parlays or other combination wagers. Patrons can qualify by risking $25 betting on the Lions to win, lose, or cover, or several wagers can be made that tally up to that total over the course of the day.

They just need to be placed prior to earning a free entry into the Thanksgiving parlay contest.

An NFL parlay only requires that a second wager be added to the combination, but BetOnline’s contest will award the grand prize to the pro football prognosticator that can correctly pick 6 winners.

If there is more than one winner, the prize will be split among them, however, no award will be granted if no one makes six successful parlay bets.

The gambler that wins the Thanksgiving Day parlay contest will have their account credited with the 10K on December 3rd, just in time to lay some action on some Week 13 NFL games or the conference championships occurring in NCAA College Football.

The winner will need to bet all ten grand at least once before collecting on it because there is a 1X rollover requirement attached, and there’ll be plenty of opportunities to double down and really maximize your earning potential.

That cannot happen without betting on the Cowboys, Lions, and the Thursday Night Football game on Thanksgiving evening, so submit your six correct NFL parlay picks now and earn some extra spending cash for Christmas.