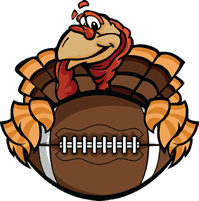 College football fans have plenty to be thankful for during the Thanksgiving holiday. Thanksgiving falls on Week 13 of the season and is the last week of the regular season for most schools.

The Thanksgiving football games are considered to be some of the best of the year because most are rivalry matchups. Most games include interstate rivals, while a few others pit conference heavyweights against each other.

For fans and bettors alike, NCAA Thanksgiving games are exciting matchups, and we’ve included information regarding all the games, including previews for some of the biggest games of the Thanksgiving weekend.

While college football does not have the same teams play each year on Thanksgiving Day like in the NFL, it does typically have one or two matchups on the holiday itself. However, all eyes will be on college football on Saturday, November 23 because of the conclusion to Rivalry Week.

The Ohio State Michigan rilvary runs deep. Each year these teams face off usually to determine what team could make a playoff bid. In recent years Ohio State has usually walked away with the victory. Ohio State looks really good so far behind the arm of QB Justin Fields.

Trevor Lawerence and the Clemson Tigers embarrassed Alabama in the National Championship game last year, and so far the young quarterback has not lost a college football game for his team. Unfortunitly for the Gamecocks he will probably put up career numbers if he stays healthy.

The Iron Bowl has become infamous since the kick return touchdown that that paved the way for Auburn’s National Championship bid. The last couple of years Alabama has flexed their sport muscle on their in state little brother to the south.

LSU said they were going to put up 50+ points a game and so far they have lived up to their expectations but finished just a few points short against Texas. Texas A&M has already lost a hard fought game against Clemson and their schedule is not favorable for them to win out. This rilvary game will have huge implecations for both teams.