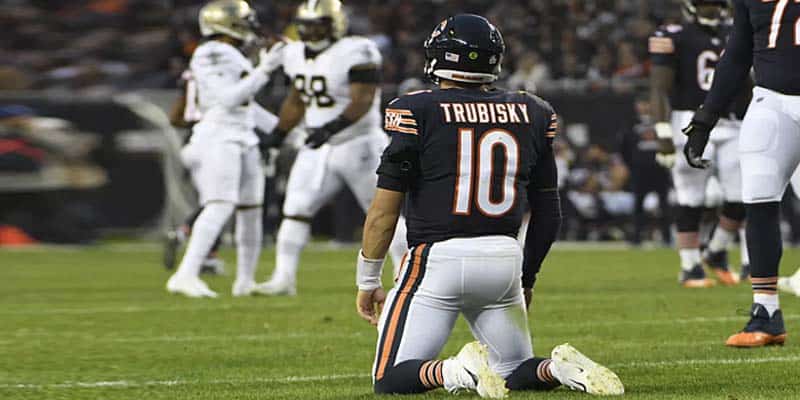 The Battle for the Bottom will take place on Thanksgiving Day 2019 when the Detroit Lions take on the Chicago Bears. While not the worst teams in the NFL, the two are playing hot potato with last place in the NFC North.

Both teams have one more game before their Turkey Day showdown. The 4-6 Bears will take on the New York Giants and the 3-6 Lions will play the Washington Redskins.

Four days later, the rivals will meet on November 28 for the Lions’ annual Fat Thursday matchup. Assuming they both win this Sunday, Chicago and Detroit will still both be under .500 come kickoff.

We previously reported that the Atlanta Falcons would be manhandled by the New Orleans Saints and speculated that the Dallas Cowboys were too inconsistent to predict a win over the Buffalo Bills.

But given the disappointments in Detroit and Chicago, the other two games, coupled with a helping of mashed potatoes and gravy, will be welcomed distractions.

Entering the 2019 season, the Bears were expected to turn the corner and compete for a Super Bowl. Going 12-4 under QB Mitchell Trubisky and rookie head coach Matt Nagy in 2018 was just what the team needed to believe in themselves.

Unfortunately, Trubisky is not performing up to expectations and his receivers are not helping. The Bears lead the league in dropped passes so far this season.

As for the Detroit Lions, they are the NFL’s version of canned cranberry sauce: always hanging around but only liked by the older generation. But in their defense, for 2019 at least, franchise QB Matthew Stafford has been out with injuries.

According to recent reports, Stafford could even be out the remainder of the season. Jeff Driskel has done a decent job filling in under center but the team is already too far gone to make the playoffs this season, especially with the Green Bay Packers (8-2) and Minnesota Vikings (8-3) dominating the top of the division.

As the odds currently stand, the Bears (+15000) and Lions (+50000) have no real shot at winning the Super Bowl this postseason. For a comparison of the entire league, see the list below.