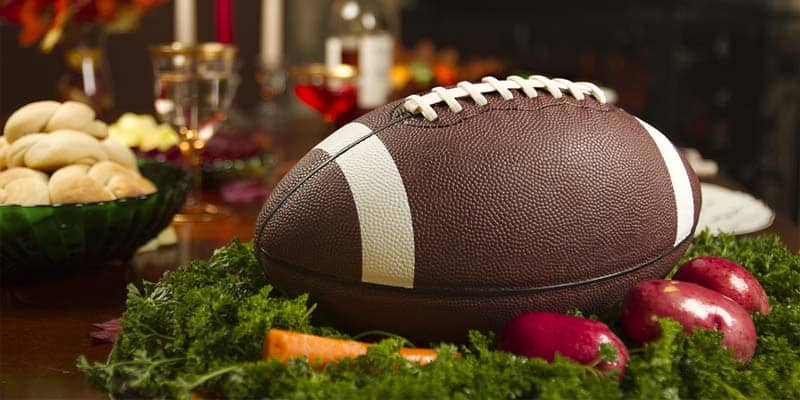 Whether your favorite NFL team is a prize-winning dish or has already had a fork stuck in them (because they’re done) for the 2019 season, it’s important to count your blessings and your bets on Thanksgiving Day.

The oven temperature of the league is ever-changing and a lot has happened since our 2018 edition of why every team should be thankful. Today, some are now seated with the adults while others must sit quietly at the kiddie table.

Nevertheless, we must all give thanks—even if you’re a Bengals fan.

But enough table chatter and no more catching tigers by their tails because the oven just “dinged” so that means it’s time for the 2019 edition of “Why Every NFL Team Should Be Thankful!”

And as always: We hope everyone has a Happy Thanksgiving!

Why Every NFL Team Should Be Thankful in 2019

The Arizona Cardinals (3-7-1) are thankful for selecting Kyler Murray with the No.1 pick in the 2019 NFL Draft, who may win the ROTY award this season.

The Atlanta Falcons (3-8) are thankful for future Hall of Fame receiver Julio Jones, who will likely finish with over 12,000 career yards by season’s end. Jones is only 31, so he’s not even close to seeing his prime enter the twilight years.

The Baltimore Ravens (9-2) are thankful for benching “elite” Joe Flacco in favor of Lamar Jackson last season. In 2019, Jackson has been the NFL’s most electric player and his improvement in the passing game is just one reason why he’s the favorite to win the MVP.

The Buffalo Bills (8-3) are thankful for another elite defense and the glimpses of greatness from QB Josh Allen. Those are the two ingredients for a Super Bowl team, and the Bills are well on their way towards a playoff berth and a bright future.

The Carolina Panthers (5-6) are thankful for Cristian McCaffrey, who is having one of the greatest all-time seasons for a running back (1,707 total yards and 16 TDs through 11 games).

The Chicago Bears (5-6) are thankful for Khalil Mack, who is arguably the league’s most feared defensive player. Oh, and he’s only 28 years old too.

The Cincinnati Bengals (0-11) are thankful for the No.1 pick in the 2020 NFL Draft. Maybe constantly mediocrity under Marvin Lewis wasn’t such a bad thing?

The Cleveland Browns (5-6) are thankful for Myles Garrett not cracking Mason Rudolph’s skull when he hit him with his own helmet.

The Dallas Cowboys (6-5) are thankful for having the only winning record in a weak NFC East division. However, Jason Garrett may still get fired even if they make the playoffs.

The Denver Broncos (3-9) are thankful for Elite Joe Flacco—just kidding. They’re thankful for Von Miller, who decided to stick with the team after asking for a trade earlier this season.

The Detroit Lions (3-7-1) are thankful for Matthew Stafford, who continues to put up monster numbers despite having less talent around him when compared to other QBs. It’s weird seeing him out with an injury—something that hasn’t happened since 2010.

The Green Bay Packers (8-3) are thankful for an improved defense and Aaron Jones. With both stepping up big for Aaron Rodgers this season, the Packers could be a team you don’t want to play in the playoffs.

The Houston Texans (7-4) are thankful for Deshaun Watson, who has quickly become one of the best all-around QBs in the league and is only 24 years old.

The Indianapolis Colts (6-5) are thankful for Frank Reich. Not many head coaches could lose a QB of Andrew Luck’s caliber and be in the playoff hunt at the end of November.

The Jacksonville Jaguars (4-7) are thankful for DJ Chark Jr. and a healthy Leonard Fournette. Now they just need to figure out the QB situation.

The Kansas City Chiefs (7-4) are thankful for a healthy Patrick Mahomes. Fans held their breath when the reigning MVP went down in October but he’s back to 100% with the team fighting for the division lead.

The Los Angeles Chargers (4-7) are thankful for Joey Bosa, who is one of the best defensive players in the NFL and maybe the team’s leader once Philip Rivers hangs it up.

The Los Angeles Rams (6-5) are thankful for a healthy Cooper Kupp. The 26-year-old suffered a season-ending injury last year but is poised to become one of the game’s best WRs.

The Miami Dolphins (2-9) are thankful for a low draft pick instead of suffering through constant mediocrity. Look for the Fins to select a QB and either make a splash or flop on deck after that.

The Minnesota Vikings (8-3) are thankful for Kirk Cousins, who’s one of the game’s most underrated QBs. He’s having arguably his best season and makes the Vikings a dark horse Super Bowl contender.

The New England Patriots (10-1) are thankful for “The Patriot Way.” With last Sunday’s win, the team set a record for consecutive double-digit winning seasons at 17. As long as Bill Belichick and Tom Brady are there, don’t bet against the Pats.

The New Orleans Saints (9-2) are thankful for Teddy Bridgewater, who went 5-0 while Drew Brees recovered from a thumb injury. The Saints also covered the spread in each of those games—the hallmark of a great team.

The New York Giants (2-9) are thankful for drafting QB Daniel Jones. The rookie looks like he’ll have a ton of upside longterm if the defense can improve and elite RB Saquon Barkley can remain healthy.

The New York Jets (4-7) are thankful for being slightly better than last year, I guess? It’s literally what I said in the 2018 edition, so expect the Jets to contend for a Super Bowl in 2030 at this rate.

The Oakland Raiders (6-5) are thankful for coach John Gruden and GM Mike Mayock. Cutting ties with Antonio Brown was the right move, and trading older players for draft picks to get young talent (Josh Jacobs, Clelin Ferrell, Johnathan Abram, Maxx Crosby) could pay big dividends when they move to their new Las Vegas home next year.

The Philadelphia Eagles (5-6) are thankful for winning Super Bowl LII since it may be a while before they win another. With Carson Wentz struggling, is it too late to get Nick Foles back?

The Pittsburgh Steelers (6-5) are thankful for Mike Tomlin. Despite losing his star QB, WR, and RB over the past year, his team could make the playoffs when other coaches would have thrown in the towel. Instead, he waves the Terrible Towel and continues to provide why he’s one of the game’s best and most-underrated head coaches.

The San Francisco 49ers (10-1) are thankful for Kyle Shanahan, who’s turned the team into a Super Bowl contender after two less-than-stellar seasons. The 49ers are one of the NFL’s most complete teams and can go toe-to-toe with anyone thanks to their young head coach.

The Seattle Seahawks (9-2) are thankful for Russell Wilson. The QB so many teams passed on is once again proving why he’ll be in the Hall of Fame one day.

The Tampa Bay Buccaneers (4-7) are thankful for having two WR over 1,000 yards before Thanksgiving. This is Chris Godwin’s first time over that mark, but Mike Evans has gone over that in all six of his seasons in the NFL.

The Tennessee Titans (6-5) are thankful for Derrick Henry, who may have taken a couple of years to get going but is now on pace to finish in the top 5 for rushing yards.

The Washington Redskins (2-9) are thankful for a head coaching vacancy. Owner Dan Snyder is gonna need to fork over the big bucks to convince anyone to coach his dumpster fire.