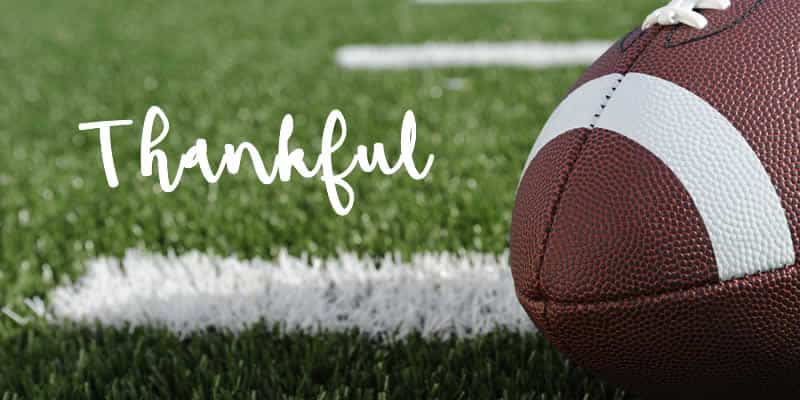 Regardless of how well or how poorly your favorite NFL team has performed so far this season, it’s important to look at the bright side and count your blessings on Thanksgiving Day.

With that said, try not to get your feathers ruffled here. After all, the numbers never lie, and facts are facts.

Now, without further ado, let’s boil (or fry because that’s tastier) a couple birds right off the bat.

The Arizona Cardinals (2-8) are thankful for David Johnson and the No.1 pick in the 2019 NFL Draft. The star running back is essentially the only bright spot on this team and will need to fill a lot of needs in next year’s draft.

The Baltimore Ravens (5-5) are thankful for drafting Lamar Jackson, who was able to fill in for Joe Flacco as the team clings on to their playoff hopes with each passing week.

The Buffalo Bills (3-7) are thankful for a defense that ranks No.2 in the NFL, allowing only 302.2 total yards of offense to opposing teams. Unfortunately, their offense is the second-worst in the league, averaging on 268.6 yards total per game.

The Chicago Bears (7-3) are thankful for hiring head coach Matt Nagy and trading for Khalil Mack since both look to be a strong foundation for the team in the coming years.

The Cincinnati Bengals (5-5) are thankful for head coach Marvin Lewis. Seriously, with another season collapsing before our eyes, one must admire how this coach has kept his job for nearly two decades despite never winning a playoff game.

The Cleveland Browns (3-6-1) are thankful for getting their first win in nearly two years. Even though the season has been disappointing and firing both the head coach and offensive coordinator was needed, the talent on the roster gives the team a bright future.

The Dallas Cowboys (5-5) are thankful for the Amari Cooper trade, which gave the Cowboys a receiver that the average NFL fan can name and a shot at winning the NFC East as well.

The Denver Broncos (4-6) are thankful for Philip Lindsey and Bradley Chubb, rookies who will likely help the team even more in the coming years if the front office can fill the void left by the Sheriff after the team’s victory in Super Bowl 50.

The Detroit Lions (4-6) are thankful for drafting Kerryon Johnson, who is having the best season by a Lions running back since Barry Sanders retired in 1999.

The Green Bay Packers (4-5-1) are thankful for the NFL relaxing the rules about landing on a QB since it didn’t do them any favors early in the season. Oh, and Aaron Rodgers staying healthy isn’t bad either.

The Houston Texans (7-3) are thankful for Deshaun Watson and J.J. Watt playing the entire season without getting injured (I hope that doesn’t jinx either one).

The Indianapolis Colts (5-5) are thankful for a healthy Andrew Luck, who has been on a tear after the first few games this season and is currently second in the NFL with 29 TDs through the air.

The Jacksonville Jaguars (3-7) are thankful for the poor play from the quarterback position, which might finally give the team a reason to move on from Blake Bortles. Probably not, but here’s hoping for the fans of the Jags.

The Kansas City Chiefs (9-2) are thankful for drafting Patrick Mahomes, who’s 23 years old and has passed for 3,628 yards and 37 TDs this season – leading all NFL QBs.

The Los Angeles Chargers (7-3) are thankful for the return of Joey Bosa from his foot injury after missing the first nine games of the season.

The Miami Dolphins (5-5) are thankful for the 1972 undefeated team, since being the definition of mediocre for over four decades as the status quo is apparently good enough for them.

The Minnesota Vikings (5-4-1) are thankful for Adam Thielen and Stefon Diggs, who have combined for 153 receptions, 1,726 yards, and 12 TDS through ten games – becoming the best receiving duo in the NFL.

The New England Patriots (7-3) are thankful for the AFC East teams are a pushover, making Belichick and Brady’s life even easier during a somewhat up-and-down season.

The New Orleans Saints (9-1) are thankful for having Sean Payton and Drew Brees for 13 years and having what might be their best season together when all is said and done in 2018.

The New York Giants (3-7) are thankful for the Browns passing on Saquon Barkley, who is likely the offensive rookie of the year and looks like he may take the throne as the best running back in the NFL with the next couple of seasons.

The New York Jets (3-7) are thankful for being slightly better than last year, I guess? Rookie quarterback Sam Darnold will need a lot of help if he is going to develop into the franchise QB the front office hopes he can be.

The Oakland Raiders (2-8) are thankful for multiple high drafts picks along with a new stadium in Las Vegas. Coach John Gruden will need to choose players who buy into bringing Raider nation back into the Super Bowl conversation in the upcoming NFL Draft.

The Philadelphia Eagles (4-6) are thankful for winning Super Bowl LII and celebrating their first championship in the modern era last season. Maybe should look at some game tape of last year to remember how to play well…

The Pittsburgh Steelers (7-2-1) are thankful for James Connor taking over as the starting running back, filling the shoes of a certain running back that fans have probably forgotten about by now.

The San Francisco 49ers (2-8) are thankful for the next season when they get quarterback Jimmy Garoppolo back from his season-ending injury. Tight end George Kittle and running back Matt Breida have developed nicely, giving the team hope for 2019.

The Seattle Seahawks (5-5) are thankful for another quiet but stellar season from Russell Wilson, who is currently on pace to finish the year with 37 TDs to only 8 INTs.

The Tampa Bay Buccaneers (3-7) are thankful for a great passing offense, led by Fitzmagic and a talented group of receivers, which helps hide a defense that gives up 32.9 points per game – worst in the NFL.

The Tennessee Titans (5-5) are thankful for one of the best defenses in the NFL, allowing only 18.9 points per game– ranked 2nd overall in points allowed. Now, someone just needs to give Super Mariota an invincibility star.

The Washington Redskins (6-4) are thankful for Adrian Peterson and his 723 rushing yards and 6 TDs through ten games. The team will need to rely on him heavily since Alex Smith is done for the year. So, go out there AP and break a leg! Oh… too soon?