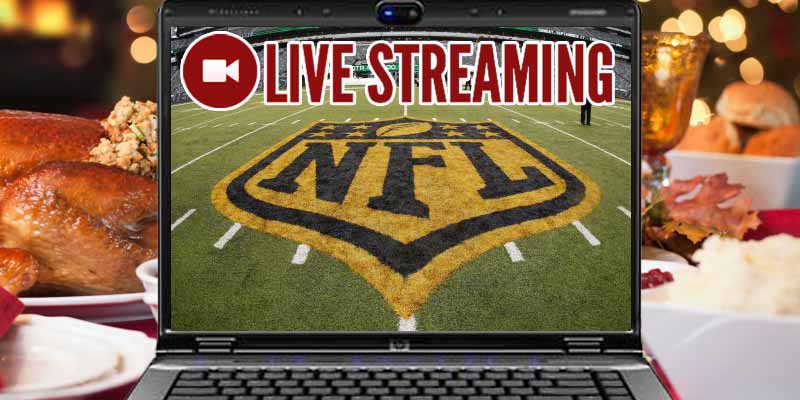 Thanksgiving is an American tradition dating back centuries and over time, people from around the country have been most thankful for the three “F’s” which are family, friends, and food.

The NFL on Thanksgiving Day is a tradition dating back when the league was founded in 1920, and since then, every year on Thursday at the end of November, families from around the country have gathered around the television to take part in the festivities.

One hurdle to jump over when spending time and eating food with family and friends is finding an opportunity to watch the football games.

Or even worse: The house you’re at doesn’t have a working TV.

Luckily, we have you covered this Thanksgiving.

Whether you have a bet riding on any of the games, are traveling somewhere that cut the cable, or your wife simply won’t let you watch the game, here are all the ways you can stream any of the Thanksgiving NFL matchups this Thursday.

The best price is always free, so here are your free options for streaming NFL games on Turkey Day.

If you only have an Apple or Android phone or tablet available, then the best option is the NFL App or Yahoo Sports app from the Apple App Store or the Google Play Store.

This allows you to stream the Thanksgiving matchups, and other NFL games for that matter, completely free from any mobile device.

What’s the catch? Well, it’s the mobile device part because the app can’t be screencast on a TV or monitor. In addition, only local in-market games and nationally televised games are available.

The only other option for free streaming is to turn to a subreddit on Reddit known as r/nflstreams.

Before each NFL game, a thread will be made in their forum and moderators will allow users to post streams to the games for users to click on and check out.

The best part? Most of the NFL streams Reddit users post are good for TV, desktop, and mobile devices, making this an easy choice for anyone wanting to stream football anywhere on Thanksgiving.

The worst part? Well, it’s very dependent on who is posting links in the game thread and some sites can be rather annoying with pop-ups and intrusive ads, requiring you to click precisely on a small “X” or some other BS that no one wants to deal with.

Advice to streamers: No one minds a few ads, but if you give me more than one pop up, then I’m leaving immediately.

Fortunately, adblocker solves most of this and most even come with a chat so you can talk trash to fans and people betting on the games.

In the event you were one of the millions of people who were done being taken advantage of by the cable and satellite companies, then you might want to try one of these options available for streaming live NFL games on Thanksgiving, along with getting a ton of other channels, at a significantly lower cost than either cable or satellite.

For each of these services, you will need an internet connection of some kind, such as using mobile data or Wi-Fi.

However, all three below offer to stream to TV, desktop and mobile devices and give you a free one-week trial to see if you like the service.

That’s all your options when it comes to complete streaming NFL games on Thanksgiving for the low, low price of free. Apart from watching the games with your cable or satellite subscription at home on your own TV, what are your options if you already have a subscription like this?

If you have a cable or satellite subscription already, then these might be your best options since you’ll be able to use your account login information and sign in to these apps on smart TVs, desktop, or mobile and steam the Thanksgiving football games for free.

Well, free because you’ve already paid your monthly bill. If you don’t have a cable or satellite subscription, then don’t worry. It’s free to try their service for a week before they begin charging $5.99/month, so just cancel before then if you have no intention of keeping them.

And one negative is each of these options will only show one of the games on Thanksgiving, so you’ll have to swap to another app when the next game starts.

What NFL Stream Should I Pick?

This is entirely up to you and is honestly based on what your current setup or situation is heading into Thanksgiving Day.

Do you have cable or satellite already? Then just watch the NFL games on your TV or download the three broadcast apps and stream there for free once you sign in with your account.

Did you cut the cord but are looking for reliable live TV streaming options? Then consider Hulu, YouTube, and fuboTV if you have a decent internet connection.

Are you cheap as hell (like me) and refuse to pay for outrageous plans like the “NFL Sunday Ticket” each year? Then check out the NFL and Yahoo apps, since they’ll be broadcasting each of the Thanksgiving matchups.

Honestly, I love using r/nflstreams on Reddit. It’s probably not for most people, but considering I can watch any stream for free from the trusted users with very little intrusiveness and chat with other football fans, it’s an option I can highly recommend for you to check out for watching NFL games on Thanksgiving day.