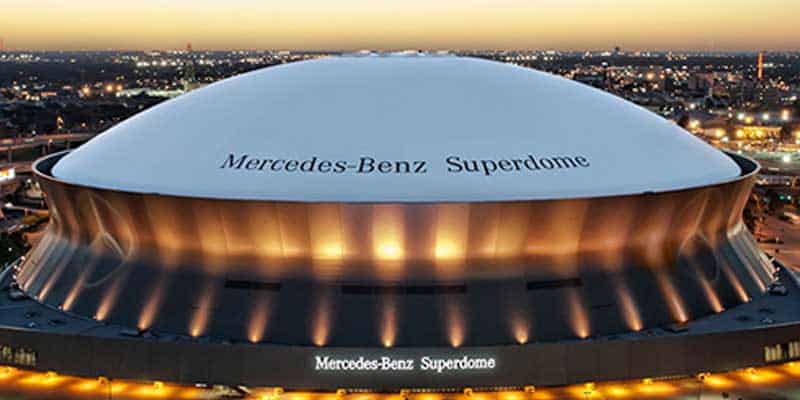 NFL games have been played on Thanksgiving Day since the league was founded in 1920 but had been restricted to home games for the Detroit Lions and Dallas Cowboys since 1978.

That all changed in 2006 when the NFL choose to feature a third game on Thanksgiving Day to fill the evening television slot.

Each Thanksgiving Day primetime matchup is selected by the NFL when the league creates the official schedule for each team.

The stadium first opened in 1975 as the Louisiana Superdome, and Mercedes-Benz purchased the naming rights in 2011.

The 76,468-capacity stadium has played host to some of the biggest events in the history of football but has never held an NFL game on Thanksgiving Day.

The Super Bowl has been played in the Superdome a total of seven times – more than any other stadium in the country. It is also set to host the NFL’s biggest game for the eighth time in 2024 for Super Bowl LVIII.

In addition to serving as the home stadium for the Saints and marquee NFL games, the Superdome has hosted big-time college games in both football and basketball.

In college football, the stadium has hosted four BCS National Championships along with being the annual site for the Sugar Bowl and New Orleans Bowl.

The second game of the first-ever College Football Playoff semifinal was played at the Superdome on New Year’s Day in 2015, and the stadium holds a CFP semifinal game every three years.

For college basketball, the NCAA has chosen the Superdome for the Division I Men’s Final Four a total of five times as well as hosting earlier rounds of March Madness on four occasions.

Other major sporting events have also been hosted by the Superdome, including Muhammad Ali winning his third and last world Heavyweight title and two WWE WrestleMania events.

Outside of sports, the stadium has held a speech from Pope John Paul II along with hosting concerts from some of the greatest music acts of all time including The Rolling Stones, Prince, David Bowie, Whitney Houston, Aretha Franklin, Paul McCartney, and countless other top music artists.

The Superdome is one of the most cherished stadiums in the United States and now, it will add Thanksgiving Day to its list of hosted historic events.

Thanksgiving Day primetime kickoff for Falcons vs. Saints is set for 7:20 p.m. CT on November 22, 2018, and NBC will broadcast the game.  You can watch for current odds on the games here.