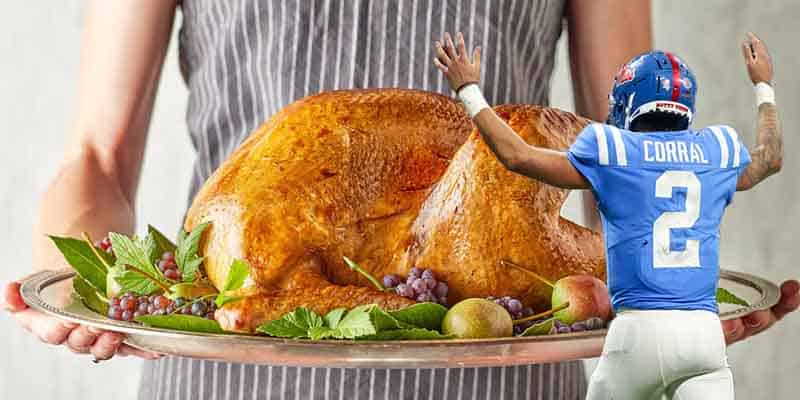 Early betting lines on Thanksgiving Day’s SEC football game favor the Ole Miss Rebels by ten points, but this in-state rivalry could prove to be a much tighter contest.

Ole Miss is led by Heisman Trophy candidate Matt Corral who is currently projected to be the first quarterback taken off the boards in next April’s NFL Draft.

Right now, gamblers are betting on the Detroit Lions to attain the number one overall pick in the 2022 NFL Draft, and Corral has a solid chance of becoming their next franchise QB.

Ole Miss is currently 7-2 whereas MSU is sitting at .500 with a record of 4-4. Both programs have the same amount of victories in the SEC, however, meaning that the winner will gain the edge in the Western Division.

While neither team is in contention to reach the SEC Championship Game, the winner will have the chance to earn a significantly higher profile bowl game during the 2021-22 NCAAF postseason.

The odds posted at online football betting sites for the SEC Western Division have been removed from the boards due to the certainly of the eventual winners, but here are the current standings.

The below odds to win the SEC reveal that the Auburn Tigers are still in play for the conference championship. Auburn has two in-conference losses, but they play Alabama on the final Saturday of the season and can gain the western conference edge on them.

Auburn really doesn’t have much of a shot, as they just lost last weekend to Texas A&M who has a win over Alabama. That means that the Tigers need the Aggies to lose another game in order to have a chance at the 2021-22 SEC crown.

As you can see by the above futures odds for betting on college football, both the Aggies and Tigers are not offered much hope for success.

Both NCAAF programs are listed with +2800 moneyline odds to win the Southeastern Conference and will net brave gamblers $28 for each dollar wagered. We do not recommend betting more than a dollar on this turkey of a wager.

Look for Thanksgiving Day NCAAF lines to become more prominent in the coming days as the holiday approaches.