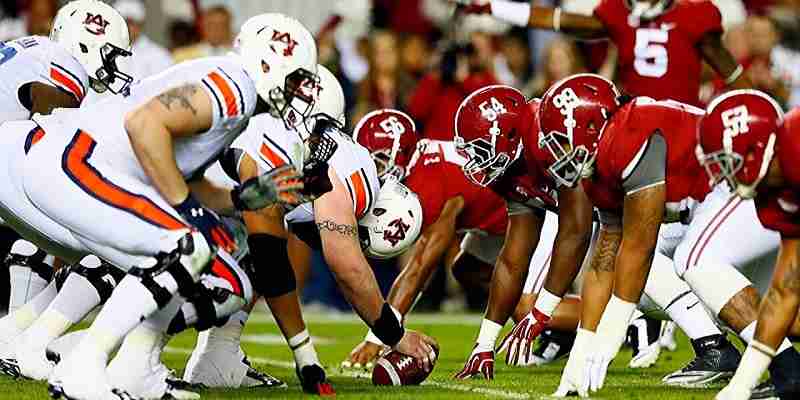 The Alabama Crimson Tide are the New York Yankees of college football and are always sure to draw attention on a national scale no matter when they play or who their opponent is.

When Thanksgiving Day approaches, so do the top NCAA Football rivalry games, pitting in-state and in-conference powerhouses against each other, often with post-season implications on the line.

The 2020 college football season has been significantly impacted by the spread of the coronavirus in the United States, and the resulting schedule alterations has removed many rivalry games from the calendar.

One game that has remained intact is the annual contest between Alabama and Auburn thanks to both of them being in the same conference. This game between the Crimson Tide and the Tigers often determines which team advances to the SEC Championship Game.

Auburn stumbled a bit out of the gate and appeared to be on their way to a lackluster effort in 2020, but they’ve recovered since starting 2-2. They are now the 24th ranked team in the nation, winning their last two games.

Don’t look now, but the Auburn Tigers are figured prominently in the 2020 predictions, as their NCAAF National Championship odds feature them at 19th overall.

On paper, Alabama vs. Auburn is a matchup of the #1 and #24 ranked teams, but according to the odds at college football betting sites like BetOnline, Auburn would be ranked five slots higher.

What makes rivalry games so exciting is that fans can throw the records out the window, as passion and home field advantage go a long way in dictating the outcome of these contests.

The only other game on the Thanksgiving weekend schedule that features two ranked teams will be when the #17 Iowa State Cyclones travel to face the #21 ranked Texas Longhorns.

Again, the college football betting odds dictate slightly different rankings, as the Cyclones are featured at 20th overall with the Longhorns coming in at #13.

Despite the seemingly favorable odds for these BIG 12 teams to climb into the national title picture, neither Texas nor Iowa State is in the top four options to become their eventual conference champion.

The situation is even worse for the Auburn Tigers, as odds on them winning the Southeastern Conference is not even an option.

It’s just a sign of the times, and college football fans should be thankful that a season is at least underway.

Still, it won’t be the same without Florida State vs. Florida, Georgia Tech vs. Georgia, and Texas A&M vs. Texas filling up the post-Thanksgiving broadcast airwaves.