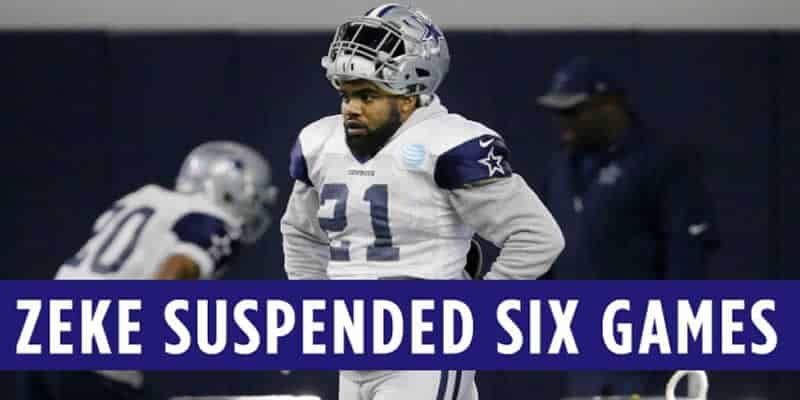 Promising Dallas Cowboys running back Ezekiel Elliot officially withdrawn his appeal to the 2nd US Circuit Court of Appeals and will serve a 6-game suspension following allegations of domestic abuse. Elliot will be ineligible to play until December 24, when the Cowboys take on the Seattle Seahawks. As their RB1, the Cowboys will struggle to cope with this loss. With the Cowboys on the docket of Thanksgiving football games, Elliot’s absence will affect their odds of winning against the Los Angeles Chargers.

The entire Zeke saga began back in July 2016. A former girlfriend accused Elliot of domestic violence in Columbus, Ohio. There were never any charges filed through Ohio police, but the NFL conducted its own 13-month investigation into the matter. On August 11, the league announced it had accrued enough evidence to justify a 6-game suspension. Elliot, with the support of the Dallas Cowboys’ organization, entered into a drawn-out appeals process. The league allowed Elliot to play while his appeals process took place. The player’s eligibility ended when the 2nd Circuit Court of Appeals removed an administrative stay that allowed him to play against the Kansas City Chiefs.

According to Elliot’s representatives, the player decided to serve the suspension in light of the current legal landscape surrounding the matter. They intimated that his withdrawal is by no means an admission of guilt, but rather a means of appeasing the NFL, which appears to not be letting go of this case. The league is upholding their suspension under the justification that Elliot violated the Player’s Conduct Policy. Elliot was also supported by the NFL Players Association, but that was not enough to prevent the suspension. They criticized the league’s handling of the situation, citing their terrible process and how they conducted their investigation.

On top of being suspended, Elliot is barred from having any activity with team. He is going to be training abroad while he is serving his suspension and can return to the team on December 18. This obviously means he will miss being a part of the NFL Thanksgiving games. In the 8 games he has played this season, Elliot racked up 783 rushing yards on 191 carries and 7 total rushing touchdowns. Elliot had one of the most impressive rookie seasons in NFL history last year, and many NFL analysts predicted the Cowboys to do well this season. However, with RBs Darren McFadden and Alfred Morris splitting the carries, it is unsure how their running game will fare.

The Cowboys are set to face the struggling Chargers on Thanksgiving, so while this game may be theirs to win, they still have matchups against the Philadelphia Eagles, Washington Redskins, New York Giants, and Oakland Raiders. Dallas is currently sitting at second place in the NFC East, so they will look to maintain their position as the postseason nears. Whether Elliot’s absence plays a major role remains to be seen, but many expect the team to suffer over the next few weeks.