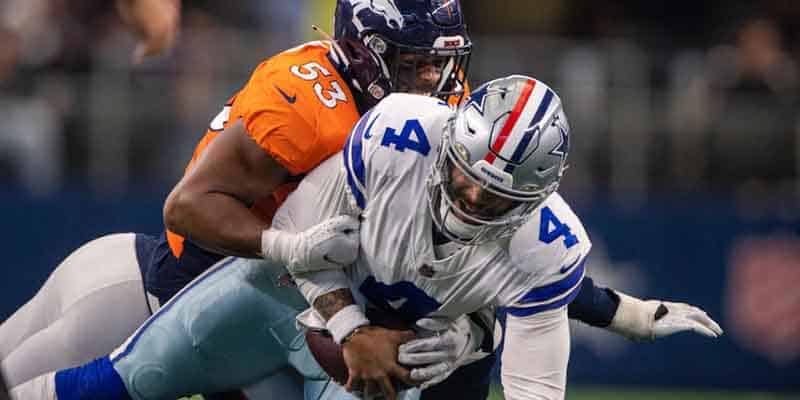 Just when fans of the Dallas Cowboys thought they could strongly believe that they’ve got the makings of a Super Bowl contender, they lay an egg and lose to the Denver Broncos by a score of 30-16 three weeks prior to their Thanksgiving Day matchup with the Las Vegas Raiders.

The Broncos started 3-0, surprising critics and their fanbase, but since then they’ve lost three out of five games and fallen to the latter half of the AFC West.

Denver is by no means a slouch, yet it was not expected that the Cowboys would suffer such a crushing defeat, especially after the Broncos traded away future Hall of Fame outside linebacker and former Super Bowl MVP, Von Miller.

The Broncos were able to make up for the lack of Miller’s presence thanks to a herculean effort put in by rookie defensive end Jonathon Cooper who sacked Dak Prescott twice and set up camp in the Cowboys’ offensive backfield for most of the game.

The loss drops Dallas to 6-2, but they are still comfortably ahead of the Philadelphia Eagles in the NFC East by a margin of 3.5 games. The odds for betting on the Dallas Cowboys are still optimistic about their NFL Playoff chances, and offer hope in the overall championship picture.

The Cowboys Week 8 performance reveals why it is good to build a lead in the NFL standings. Although Dallas appears unstoppable on offense at times, an uneven matchup or a new scheme can completely disrupt any pro football franchise’s efforts to move the ball.

How Dallas reacts and adjusts to the loss to the Broncos will play a large role in how the remainder of their season goes, as now other defensive coordinators have plenty of game film to figure out just exactly what recipe Denver used to shut down the Cowboys.

Most NFL betting sites still feature Dallas near the top of their Super Bowl futures odds, suggesting that yesterday’s dud was an outlier, and we’ll find out between now and Thanksgiving how legitimate those predictions are.

Over the next two weekends, the Cowboys will face the Atlanta Falcons and then the Kansas City Chiefs.

The Falcons represent a benchmark in the NFC for Dallas. Can the Cowboys best a hard-nosed Atlanta team that they should be better than, or is Dallas closer to the middle of the pack than they’d like to believe?

Echoes of last year’s “NFC Least” designation for the Cowboys’ division are still reverberating in the minds of NFL fans as well as the oddsmakers at NFL Thanksgiving Day football betting sites.

Two wins over the Falcons and Chiefs during the fortnight prior to Thanksgiving would wrangle in those Cowboys doubters and get them back on board with their postseason odds.

If the Dallas Cowboys can then parlay those efforts into a big win over the Las Vegas Raiders on Thanksgiving Day, consider them the front-runner for Super Bowl 56.