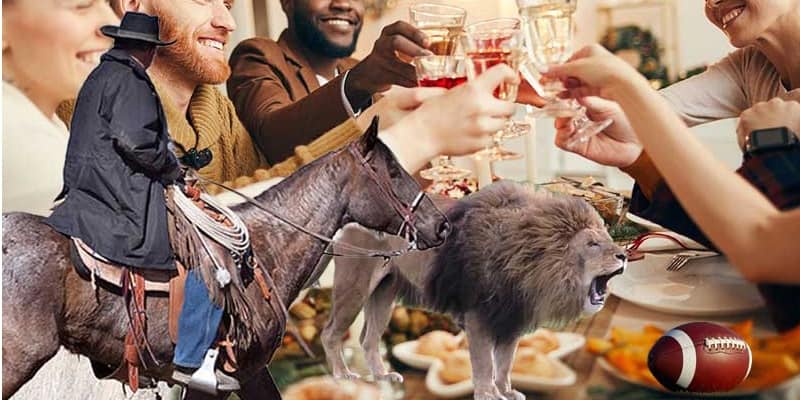 *Update – The Pittsburgh Steelers vs. the Baltimore Ravens game tonight has been postponed until Sunday at 1:15 pm due to COVID-19.

The Pittsburgh Steelers will try to climb to 11-0 and maintain their unblemished record when they face their AFC North rivals, the Baltimore Ravens, on the Thanksgiving evening edition of the NFL’s Thursday Night Football.

While the Steelers try to maintain perfection, many are asking if the Dallas Cowboys and the Detroit Lions are perfect for the Thanksgiving Day NFL broadcasts.

Sure, many are still betting on the Dallas Cowboys to pull through and win the NFC East, but it has been 25 years since they have won a Super Bowl, despite their continued popoularity nationwide.

The Detroit Lions will once again host the opening game on Thanksgiving, playing the Houston Texans who have been underwhelming in 2020, arriving with a record of 3-7.

Still, the Lions’ betting odds suggest that the Texans will travel to Detroit and defeat them by a point spread of 3 or more.

Thanksgiving NFL games have been played for nearly a century now, and the Detroit Lions have been a part of the tradition for nearly the entire run.

There are many reasons why the Lions and Cowboys should be scrubbed from Thanksgiving Day NFL schedules and relegated to our distant memories like a bad Joe Buck pun, but let’s have a look at some sound logic on why they should stick around for good.

2020 marks the 79th Thanksgiving football game for Detroit, and the 53rd for Dallas. The 53-79 year old demographic represents a large portion of the purchasing audience, and advertising agencies like to target them specifically.

Although Dallas may seem like a more favorable option than the Lions to broadcast nationally, Detroit has been a part of the holiday tradition for nearly 80 years, and is a crucial part of the afternoon’s proceedings.

Dallas has carved out their portion of the tradition as well, establishing themselves as “America’s Team,” and creating memories of Cowboy victories that were celebrated as families around the United States feasted on culinary masterpieces.

Detroit and Dallas even sport similar looks, with uniforms adorned with large portions of silver-gray with splashes of blue to offset the metallic sheen.

Who said that all traditions have to be winning traditions? Can’t we bask in an NFL franchise’s lack of success?

The Green Bay Packers, Chicago Bears, and Minnesota Vikings in the NFC North probably enjoy watching the Lions get whipped while scarfing down some finely roasted turkey.

The Washington Football Team may be in a similar situation as Dallas when it comes to recent success, at least they aren’t featured on Thanksgiving each year for the entire USA to focus on.

Still, Thanksgiving just wouldn’t be the same without the Lions and Cowboys involved, despite how pathetic they may be or how much of an underdog they are in the NFL betting odds.

They may be akin to that uncle that we only see once a year during the holidays that loudly shares their unsavory opinions at will.

However, Detroit and Dallas are the unsavory uncles of the entire USA, and they should be featured on Thanksgiving television screens for eternity as a reminder that winning isn’t everyting.