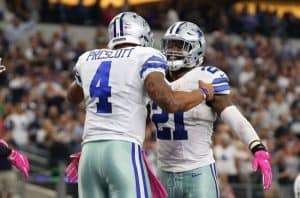 The Dallas Cowboys have found themselves up quite a few spots in ESPN’s NFL Future Power Rankings—from 26th to 6th overall. ESPN has published the rankings consecutively for the past 5 years to predict how each NFL team will perform over the course of the next 3 upcoming seasons. In putting together their rankings, ESPN examines teams’ quality in 5 areas—roster (excluding QB), QB, Draft, front office and coaching.

Cowboys fans have seen a drastic shift in performance over the past few seasons, leading to variant power ranking positions, but ESPN is under the impression that the franchise is on an upward trajectory. Some detractors believe this to be a preliminary reaction to their strong 2016-2017 season, but to be fair, it was a positive season for “America’s Team”. Is it enough to justify their moving up 20 spots? In 2014, the Cowboys were coming off an 8-8 season and fell in the 28th spot on ESPN’s list. They had a turnaround the following year and finished 12-4, which caused their surge to the 6th spot. 2016 was an abysmal year for Dallas, as they went 4-12 and saw themselves fall back on ESPN’s rankings to the tune of 20 spots. Now, after an impressive 13-3 run, they managed to climb their way back into the top 10. Their current spot makes them the highest ranked NFC East team, ahead of rivals the New York Giants, Philadelphia Eagles and Washington Redskins.

How exactly did Dallas find their way back? Through some surprising debuts of what looks to be their new franchise players. After losing veteran QB Tony Romo to injury (again), the Cowboys looked destined to have a repeat of their 2015-2016 campaign. Rookie QB Dak Prescott was handed the keys and led a stellar breakout season with 311 completions with 23 touchdowns for a combined 3,667 in passing yards. Prescott stunned analysts and rewrote the notion of ‘rookie nerves’ by taking charge of the team. Veteran receiver Dez Bryant praised the young star and embraced him as the new leader of the team. The move looks to be permanent, as Tony Romo announced his retirement at the end of the season.

Another rookie sensation was RB Ezekiel Elliot. Elliot had 322 rush attempts with 15 touchdowns for a total of 1,631 rushing yards. The promising RB lit up defenses week after week and showcased his running ability. Elliot will likely improve in future seasons, cementing him as a role player for this new Dallas Cowboys identity.

Prescott and Elliot both turned out to be strong picks in the Draft for Dallas. Other notable Draft picks include Tyron Smith, Travis Frederick, Zack Martin and Byron Jones. The Cowboys opted for Martin over Johnny Manziel in 2014, an evasive maneuver that proved fortuitous for them as Manziel is no longer in the league. They attempted to trade up for Paxton Lynch in the 2016 Draft, but their failure to do so led to Prescott’s selection. While the latter is more a stroke of luck, their Draft performance has been solid recently.

The only real problem facing the Cowboys currently is their defense, specifically their pass rushing. Their conference is full of talented QBs, rushing the passer is an important component of their defensive strategy. Their defense as a whole has changed drastically in terms of personnel, so it will likely take time for chemistry to manifest. Luckily for them, their offense has enough firepower to put them ahead, but as any avid fan will tell you: defense wins championships. Football aficionados are also already looking ahead to the highly anticipated 2017 NFL Thanksgiving Day football game in which a Cowboys victory can make or break the holiday for many NFL fans.

Dallas should take their new ESPN Future Power Ranking with a grain of salt, especially when you see how much their spot has fluctuated in recent years. If they put their heads down and grind throughout the season, they will make the Playoffs again and please those fans who hang their hats on the Thanksgiving football tradition that accompanies their turkey dinner. We will see if Prescott and Elliot can push their sophomore seasons past the divisional round.