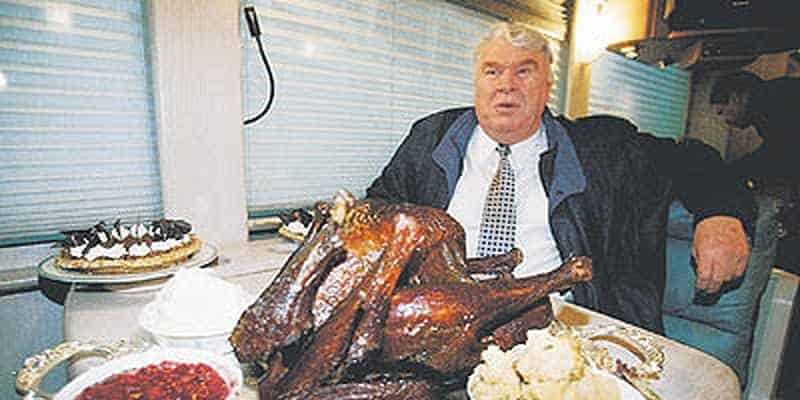 Has it really been over eighteen years since John Madden called a Dallas Cowboys game on Thanksgiving Day? His last year in the booth at FOX Sports was 2002 before moving on to cover prime time NFL games on other networks.

For the better part of twenty years, John Madden was like an extended member of the family, with his words forming a cacophony of background noise at Thanksgiving Holiday gatherings.

Whether anyone cares about the game is less important than Madden’s presence. Just like previous generations reflect on the news reports issued by Walter Cronkite and the like, our generation will look back fondly on the memories of celebrating fellowship with loved ones while John Madden was heard rattling on about football strategies in the background.

John Madden is also responsible for creating the annual Turkey Leg award, where the most valuable player of the game is literally awarded a freshly sliced turkey leg for their efforts.

Oddsmakers have taken the bait. Each November, sportsbooks produce Thanksgiving NFL Football bets that ask patrons to wager on which player will be feasting on the leg during the post-game interview and presentation of the award.

As a country, we might not miss coach Madden in the booth so much if not for the presence of Joe Buck and Hall of Fame quarterback Troy Aikman each Thanksgiving.

The duo of Aikman and Buck have taken over the roles of John Madden and his long time broadcast partner, Pat Summerall, and their efforts during the Thanksgiving Day NFL broadcasts are insignificant in comparison.

Aikman and Buck will not be inspiring any articles lamenting their absence twenty years from now.

The deficiency is deeper than that. One could even argue that the importance of the NFL games being broadcast on Thanksgiving Day have decreased in relevance, and no longer feel like must-see-TV while feasts are being enjoyed.

Generally speaking, television ratings for NFL broadcasts have been down across the board. The league is looking for answers and a potential solution could be partnering up with sportsbooks and including NFL betting odds in their broadcast graphics.

Many US states are now moving toward the legalization of domestic sports betting operations, and as a result, professional sports leagues are becoming more comfortable with major sportsbook franchises.

Recently, Turner Sports made a deal with FanDuel to incorporate betting information into their NBA game telecasts. The thinking is that sports bettors tend to watch games longer than non-betting viewers, and the additional eyes drawn from gambling’s inclusion could make up for the lagging ratings.

The XFL, which plans to return in 2022 for another re-start, featured betting lines in their scoreboard graphics, and fans didn’t seem to mind at all.

The inclusion of betting odds on Thanksgiving Day NFL games could prove to be the perfect solution to the NFL’s ratings lag and will almost certainly add an interesting element that will at least give fans an edge when predicting the outcome.

Just considering betting elements like the point spread, the over/under, and money line odds will inform viewers of NFL wagering tactics and make them more likely to be comfortable when presented with an opportunity to lay some action on a holiday game in the future.